The last few weeks have been a whirlwind of activity.  Since finishing the half-marathon, the Falco family ran

their first 5K race…yes our first family run.  It was Race to Solve the Puzzle. Not only did we get in some priceless family time, but we ran in honor of a very special little boy, Jacob. His picture is on our shirts.

The girls did an amazing job and finished in a very admirable time…not that time mattered…I think I was more shocked at their ability and speed than anything.  That is family time I value and look forward to many future races with Team Falco.

The very next weekend was the Free to Breathe 5K. It’s a newer race to Charlotte and appropriately named considering my “condition”.  This was a planned “fun run” (I can say that now that I’ve run a half) with my training team and a few extremely special friends.  As you can see we took the event by storm and had some great fun running for the cause, dressing for the occasion and showing others that cancer doesn’t always bring you down…in fact it lifted all of  us up.    I’ve been riding high since that day…it’s not my “Sue”perman cape, but the super powers our team possess when we are together.

Since the day of my diagnosis our team has come together to support me in a way I never could have imagined.  It makes me shudder to think I almost didn’t join the training group.  I was nervous about running the half along side so many accomplished runners.  Instead of being intimidated, I was inspired.   Now I am just amazed. Their energy, determination, and passion for our sport gets me out of bed every morning and I want to run, walk, bike, and even swim!!!! I want to fight like hell against this cancer.  I am running another half-marathon in November and before that I will finish my first TriAthlon…that’s right…I’m not giving-up or giving-in.  I’m getting stronger…it feels like a superpower. 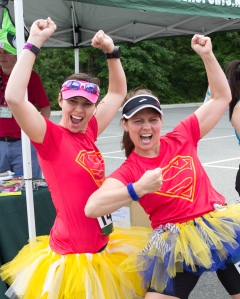 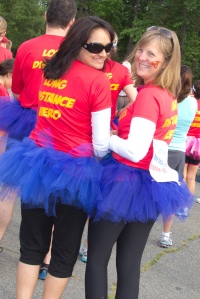 A funny little shout out for Omega and the team…

“Omega, ‘The Greatest Name In sports’, presents: The Adventures of the Long Distance Heroes. Faster than a speeding bullet! More powerful than a locomotive! Able to leap tall buildings in a single bound! (“Look! Up in the sky!” “It’s a bird!” “It’s a plane!” “It’s the Long Distance Heroes!”)… Yes, it’s the Heroes … strange visitors from another planet, who came to Earth with powers and abilities far beyond those of mortal men and woman!

This is my team and I am so proud to be a part of it.  A big thanks goes out to Paige for the shirts…we were unified with a capital U!  Dominque for the tutus and inspiration to make additional ones so no one was left out.  To the guys on our team…thanks for not taking yourselves to seriously and joining in the fun!!!  Everyone loves a guy man enough to sport some tulle for a good cause.  And last, but not least to the entire team of friends, family and teammates for getting up early and putting your PRs to the side so that we could cross the finish line together…Now if you look at little closer you might notice our team PR…I love Photoshop!!!! 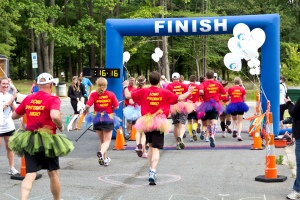 One the medical end of things I am doing well.  I’m actually in my first class seat now getting the “magic juice.”  I have been running, golfing (at the range…mentally smacking a ball around is very therapeutic) and enjoying time with friends. I’ve now had four treatments out of 12.   I do have my first scan on June 7th….Results will be in on the 11th.  I promise to update all of you via the blog.  I would love to personally call each of you, but there are not enough hours in the day.

I miss you all and appreciate every meal, card, call, gift, hug and prayer.  Thanks for keeping me smiling.