When I decided to run a 1/2 marathon I thought for sure I would run only one.  Boy I was in for a surprise when I finished my first battle with no intention of being FINISHED!!!  That’s a dirty little “runner’s” secret (well it’s not only for runners). They, runners, don’t tell you about the addiction, exhilaration with the feeling of accomplishment, happiness and well-being that comes when you master an event such as a 1/2 marathon. Even if they did, you won’t believe them until it happens to you.

That is how I live my life.  I may finish something, but I am never truly finished.  I continue to evolve and learn from my experiences and accomplishments.

I completed my first triathlon on Sunday.  It was one of the best days of my life.  That sounds so cliché, but honestly it was a remarkable spate of time.

Lisa, Sue and Sandra waiting to get our swim on!

I am not a swimmer or cyclist, but yesterday, I was … I morphed into a triathlete!!! As terrifying as it felt, I now was a woman on a mission.  Once I started the race, anxiety and fear turned into exhilaration and incurable euphoria.  I was doing it…really, really, doing it.  After the race I met up with family and friends at the post race expo.  In one of the tents, I spotted a purple shirt with the following saying “Finisher, but Never Finished”.  Hello, that shirt had to be mine.  Off I went in search of someone who would take my money in exchange for a message that truly represented my journey.

My favorite tee-shirt EVER!!!

The shirt was from a tri kit company called  re{vici}.  I met one of the founders in the tent only to discover, he had just messaged me on my Long Distance Hero Facebook page.  After he read my story, on the Brooks Running blog, he was offering me a shirt with a message he thought best represented my story.  Ha ha…it was the very same shirt!!  As I was writing this blog I looked up the story behind the company…here is what I found….

What is {re}vici?  From the Latin word for “I conquered”, vici, we started to create something. However, vici seemed to imply we were finished, which is rarely the case. Anyone who has ever chased a “PR” knows that when one race is over, there is always another. Again, we will strive to conquer a new goal. That was it…we conquer goals, races, fears…OURSELVES…again, and again- {re}vici 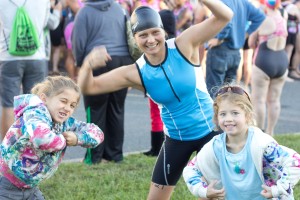 Another Live Lesson Learned:  The world works in wonderful and inspiring ways most of the time, listen carefully so you don’t miss the knocking when inspiration shows up on your door step!  When it does {re}vici!!! Sue

My alarm went off twice Sunday morning.  It was reminder to get out of bed and run.  No simple task as I lay there between my warm, cozy sheets.  So I peeled myself off the mattress and got dressed for a much needed run.   What motivated me to get out of bed?  Well here it is…

We all need motivation some need more than others, but it needs to come from inside.  A professor of mine always said “No one can motivate you, but yourself”.  True that!  We can, however, be inspired by others and I seek that on a daily basis.  Using the inspiration gives me the motivation to run, dance, sing and get a little crazy.

So off I went for my run.  At the 1.5 mile marker I asked my running partner if we should…go the extra mile and we did.  Knowing that I exceeded my goals for the day and at a faster than normal pace for me felt so good.   I felt like I had climbed Mt. Everest. On the way home, I opened the windows and the sun roof and sang at the top of my lungs in celebration of my achievement.  This seemingly small goal had big pay offs and I will ride the endorphins as long as they last or until I do it again.   Achievable goals are the ultimate in success and each one should be celebrated with the same amount of energy and excitement as the big ones (Savannah, her I come!).

Following my run and the dance party in my car I got to fully celebrate my run with my ever fun loving, inspirational, and very competitive training team.  In honor of the Olympics, we held a relay event…USA vs. Canada.  It was great fun and I am so happy I MOTIVATED myself to go out and have a little crazy time.

I hope this story inspires you to find motivation and set achievable goals that should be celebrated and enjoyed!!! 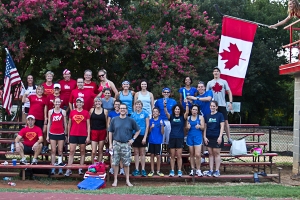 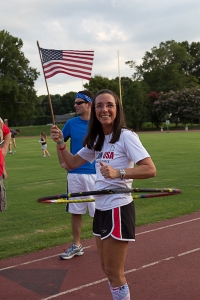 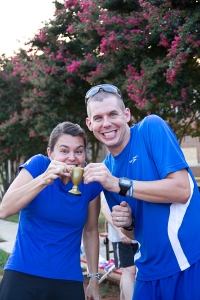 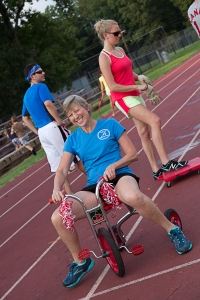